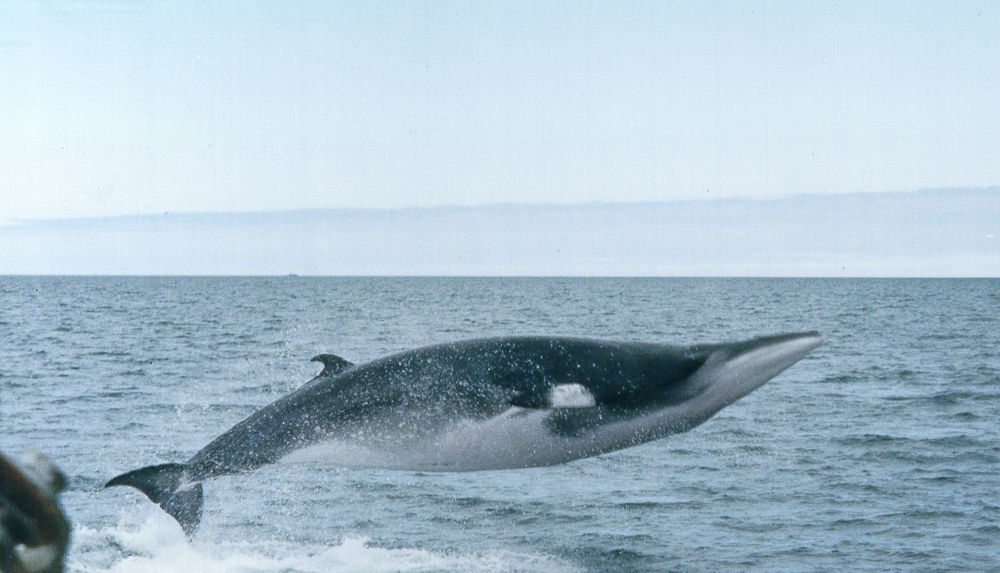 The common minke whale (Balaenopterus acutorostrata) is smallest of the baleen whales in Icelandic waters. However, by all other standars it is quite a large animal as it can reach up to 10 m in length and 10 t in weight.

Minke whales frequently visit inshore waters, where other baleen whales—except humpbacks—are rare. Similar to humpbacks, minke whales have opportunistic feeding habits compared to the larger baleen whales, their diet ranging from planktonic crustaceans (krill) to large (> 80 cm) cod. In Icelandic waters, sandeels, codfishes (mostly cod and haddock), herring, capelin and krill seem to be the most important groups. The annual consumption in Icelandic and adjacent waters has been estimated to be of the same order of magnitude as the total catch of the Icelandic fishing fleet or 2 million tonnes.

Common minke whales have been hunted in Icelandic waters during most of the 20th century, and still are. Minke whaling has been conducted by small boats, in comparison to the hunting of large baleen whales which was conducted in large boats from only one station in the latter part of the 20th century.

In a sighting survey conducted in 2001 about 43,000 common minke whales were found within the Icelandic continental shelf area, indicating that it was by far the most widespread of the baleen whales in Icelandic waters. But in 2009 the number of whales in this area was only 10,000-15,000 animals, probably as a result of a shift in distribution due to poor feeding conditions. There are at least two possible factors causing this, increased competition from the rapidly growing humpback stock or the stock collapse of one of its main prey, the sandeel.