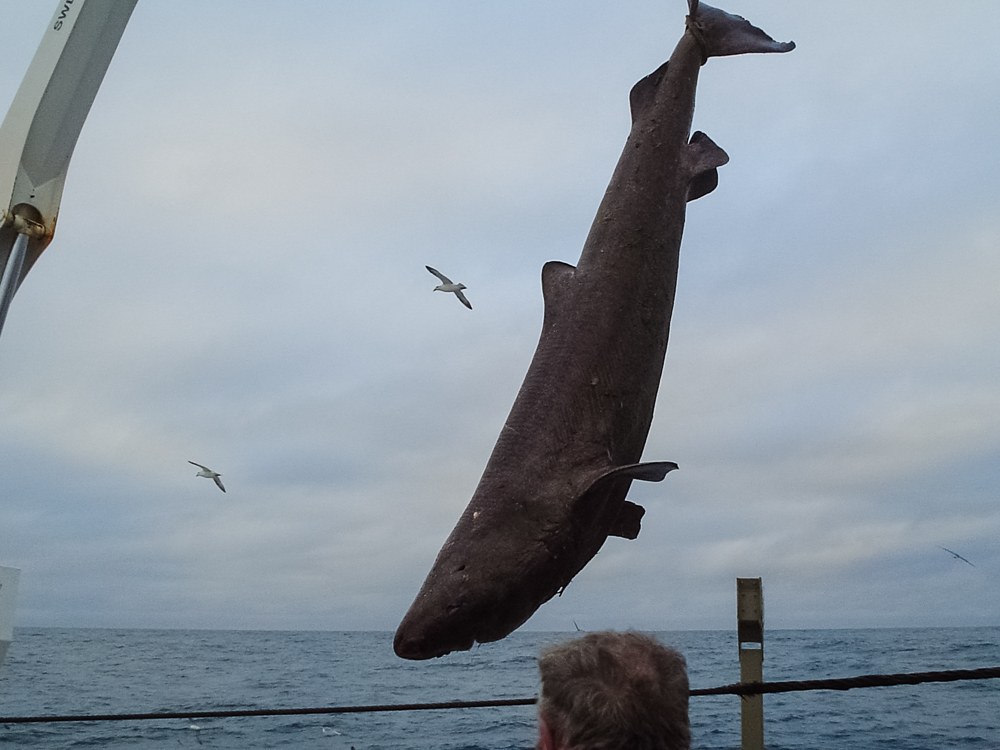 The Greenland shark (Somniosus microcephalus) is the most cold tolerant shark species in the world and the only one found regularly in the ocean north of Iceland. It is a member of the shark family called sleeper sharks because of their extremely slow swimming and lazy nature. This is a large long-lived demersal species that grows to at least 6.5 m (21 feet) and 1,000 kg (2,200 lbs). It eats almost anything that it can swallow and is a famous glutton. Various types of marine animals have been found in its stomach as well as cats, dogs, horses and reindeer. There is probably no need to fear the shark on land because these are probably carcasses that have drifted out into the ocean. In Eyjafjörður a shark was found with a large seal and fourteen large cod in the stomach.

The Greenland shark has been caught in Icelandic waters since ancient times. In the 19th century and the beginning of the 20th it was actually one of the most important commercial species in Iceland, and in some years, possibly the most important. Until the early 20th century the shark fisheries were the most important fisheries in northern Iceland, particularly in Eyjafjörður, where they were the main catch of the first large sailing boats operating there. Shark fishermen were the heroes of the sea at the time and best known among them was Shark-Jörundur from the island of Hrísey.

Historically, the Greenland shark was targetted for its liver which is very rich in valuable liver oil. Competition with less expensive whale oil and crude oil led to the collapse of the shark oil industry. Today the Greenland shark is mostly caught only as bycatch in other fisheries.

In more recent years, the Greenland sharks that are caught are the source of a dish called hákarl, it really only means shark in Icelandic. Since the shark processes its liquid waste throughout its meat, it is unfit as a food without special treatment. First, the fish's meat is fermented for months. Then it is hung hung it to drain most of the pungent ammonia from it before it is fit for consumption. It is served uncooked and usually cut into in small cubes. Although this dish has been a facet of Icelandic cuisine for generations, its popularity among younger generations is decreasing. It is now a very common novelty for tourists to taste because the strength of the flavor and smell are shocking to most people.