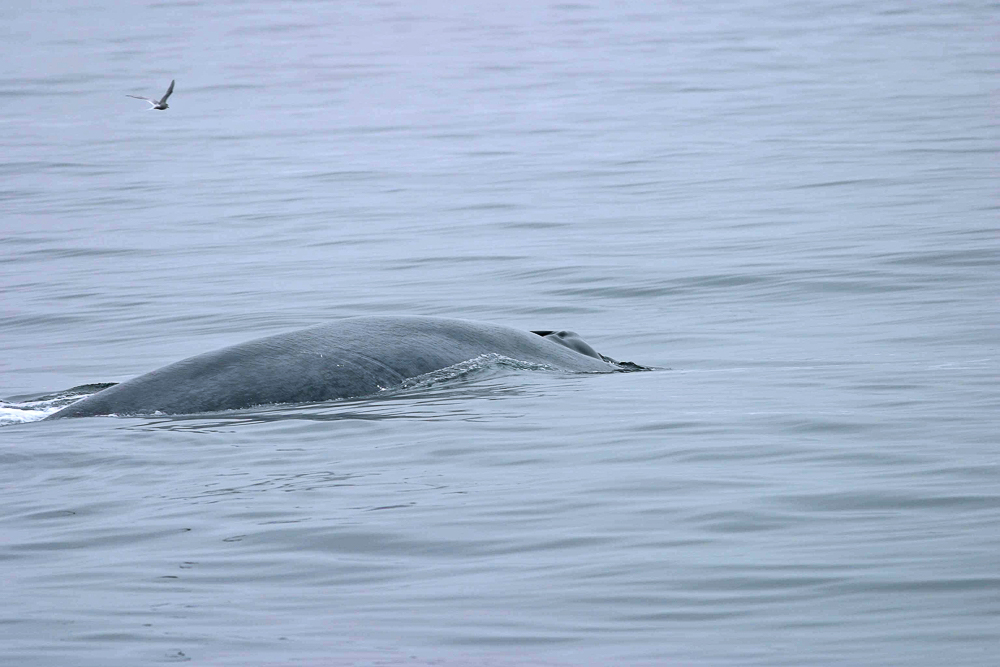 The blue whale (Balaenoptera musculus) is the largest known animal in the history of the planet. It can reach the astounding size of over 33 m in length, weighing in at 190 tons. However, the average size is about 70 tons, which is still more than 30 times heavier than the largest elephant. A man of average size would be able to crawl through the blue whale’s largest blood vessels and the animal’s heart is the size of a small car. Blue whales can live at least to 100 years of age. The blue whale's tongue is the strongest known muscle in the animal kingdom.

The blue whale can be found throughout the world’s oceans, but the species is very rare as a result of heavy whaling in the past. After whalers switched to steamboats and explosive harpoons in the 19th century, the number of blue whales in the ocean declined rapidly because the animal's size made it a desirable target. In 1883 Norwegian whalers set out from Iceland for the first blue whale hunt in Icelandic waters. Later the Icelanders themselves hunted them as well. In 1960, the species was officially protected by the Icelandic government and not a single one has been killed in Icelandic waters since. The species was globally protected by law in 1965.

Current estimates suggest about 1000 blue whales are found in Icelandic waters and only 1500 in all of the North Atlantic. The entire global population before whaling commenced is estimated at 300,000 animals, so they have a long way to go to recover completely.

The blue whale is regularly seen in Icelandic waters, especially off the north coast during the summer, even though its numbers dropped dramatically as a result of whaling. They are most often alone or in very small groups. Though they are often closer to land than their nearest cousins, fin whales and sei whales, they do not often enter the fjords.

As with many other whales, the blue whale is streamlined and it can reach a speed of 30 km/hr. They feed voraciously in cold waters at the northern and southern ends of the ocean during the summer months and then migrate to warmer waters during the winter, where they fast. They mate over the summer and the gestation period of 10-11 months follows. Cows give birth in the spring when the animals have returned to their feeding grounds. It takes about eight months to wean the calf, during which time the young animal gains an average of 90 kg/day. It will reach maturity around ten years later.

Blue whales mainly eat planktonic crustaceans, especially krill. But, they have been known to eat small fish and squid, as well. They usually dive down to 50-100 m and can hold their breath for up to 15 minutes at a time.

Other than man, the only animal known to kill blue whales is the killer whale. These attacks by the far smaller orcas are rare and probably the majority of cases involve attacks on young blue whales, though it is believed that a large pod of orcas could kill an adult.