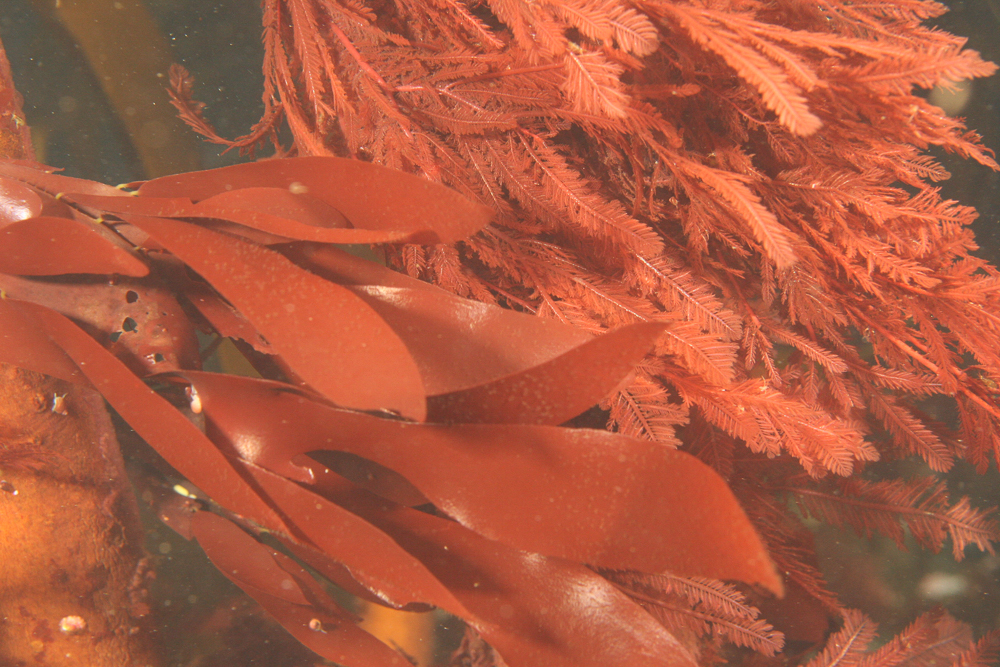 Red algae (Rhodophyta) are the most diverse of the benthic algae. However, they are usually not large or conspicuous. Red algae are also interesting because they are a very primitive group, only distantly related to plants and animals.

Red algae are almost exclusively found in the ocean. They are especially common below the kelp forest because they can survive with less light than the brown algae.

Most species grow in thin sheets or long thread-like shapes. For instance, purple laver (Porphyra umbilicalis), which grows were wave action is strong, looks awkwardly shapeless when the tide goes out, but becomes a graceful sheet or veil shape in the water.

Some other species are more complex. For example, coralline algae (Corallinacea) produce a branching calcium structure similar in appearance to the branching structures of coral. These are red when alive, but their calcium “skeleton” becomes white after they die. Over time, these algae create a thick calcium layer on the bottom. Such layers are commonly found in shallow waters along the Icelandic coast. 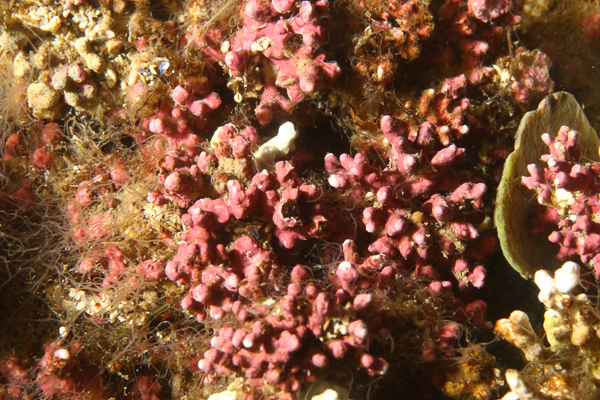 Recently, material processing of these calcium layers has been conducted in Arnafjörður in the Western Fjords. Other calcium-forming species—such as the Lithothamnion sp seen turning the rock pink in the photo—build a crust that looks like terrestrial lichen seen on rocks.

Many red algae are edible. Dulse (Palmaria palmata), Irish moss (Chondrus crispus), and purple laver are the most commonly harvested edible red algae in Icelandic waters. Dulse (lower algae in photo) was an important food source for early Icelanders so coastal lands where this alga grew were of higher value than others. In fact, the Icelandic sagas are the oldest records we have that show the importance of algae to the early civilizations in northern Europe.

Algae are no longer a significant portion of the typical European diet, despite the high nutritional value they contain. However, they are still an important part of people’s diet in much of Asia where a wide variety of food products are made from this marine resource, for instance, the nori used by sushi chefs is a red algae. Asian culinary arts are ever more popular in European and North American cultures and this is causing a resurgence of algae in our food.