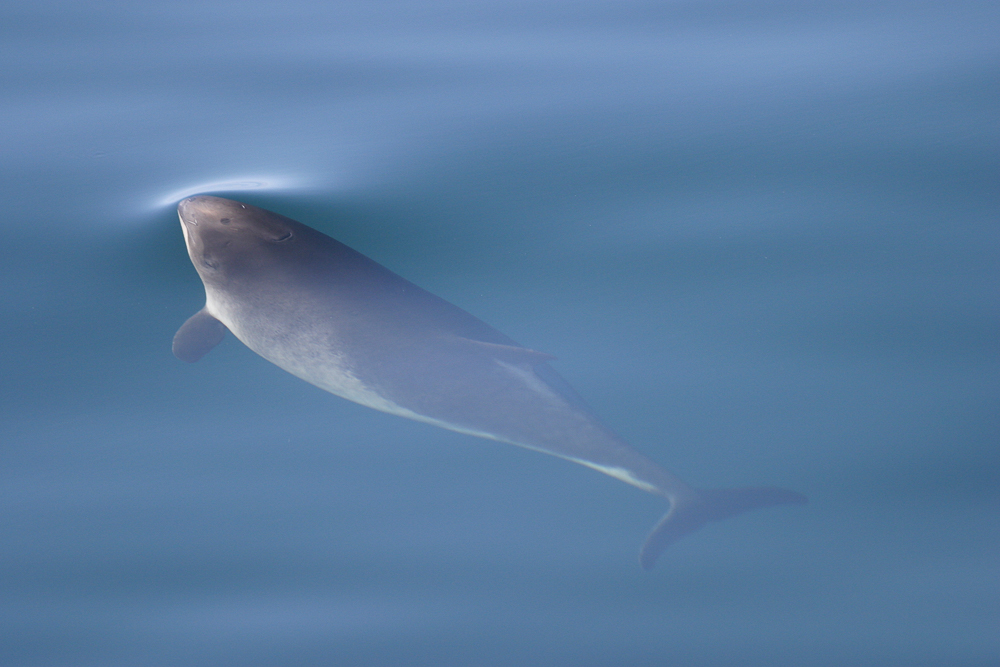 Porpoises and dolphins are often grouped together, as they are physically similar and behave in similar ways. However, they are not at all related apart from the fact that both are toothed whales. The harbour porpoise (Phocoena phocoena) is among the smallest of cetacean species and the smallest one in Icelandic waters. The average size of males is 1.5 m and 52 kg and females 1.6 m and 77 kg. The maximum size is about 2 m long and 90 kg. It is easily distinguished from the dolphins by its small size, oval shape and short nose. It is very common in Icelandic waters and it is quite often seen from shore all around Iceland because it is the most coastal of all the whale species. Porpoises are migratory like almost all other whales. It is rarely seen along the coast in winter but arrives early in the spring. Their diet consists mainly of small fish such as capelin, sandeels and redfish but porpoises are opportunistic feeders depending on food availability.

The number of porpoises around Iceland has been estimated at around 27,000 individuals, based on whale surveys in 1987 by the Marine Research Institute. This is a low estimate as the survey was not conducted in close inshore waters, where the porpoise is probably most abundant.

Porpoises were exploited to some extent in Iceland in the past, especially in early spring when other food was scarce. They were originally caught with spears, then during the 20th century special nets we designed for the purpose. There is currently no direct harvest of the porpoise in Iceland, but it often becomes entangled in gillnets for cod or lumpfish, in wich case, it is often subsequently be eaten. This has been occurring in Icelandic waters for decades and there are no signs that the porpoise stocks have declined as a result. The porpoise grows quite fast and reaches maturity at the age of 2 or 3, which makes the stock quite resilient.