About 340 fish species have been recorded in Icelandic waters, about 70 of these have been found off the northern coast of Iceland. The reason that more species have not been found here is that many of them are deep water or oceanic species that are never seen close to land. Northern Iceland is at a boundary of two ecological zones, the subarctic (also called cold temperate or boreal depending on whom you talk to) and the Arctic. Thus, species from both of these zones occur there.

Among the species that are from the north are polar cod (Boreogadus saida), eelpouts (Lycodes spp.), Greenland shark (Somniosus microcephalus)  and Greenland halibut (Reinhardtius hippoglossoides). All are much more common in the deep cold waters just outside the fjords. Examples of species from the south are Atlantic mackerel (Scomber scombrus), dealfish (Trachipterus arcticus) and monkfish (Lophius piscatorius). However, while they are vagrants, none of those species are common in the north. The oceanic conditions there are just too variable for these species to be able to live there permanently. 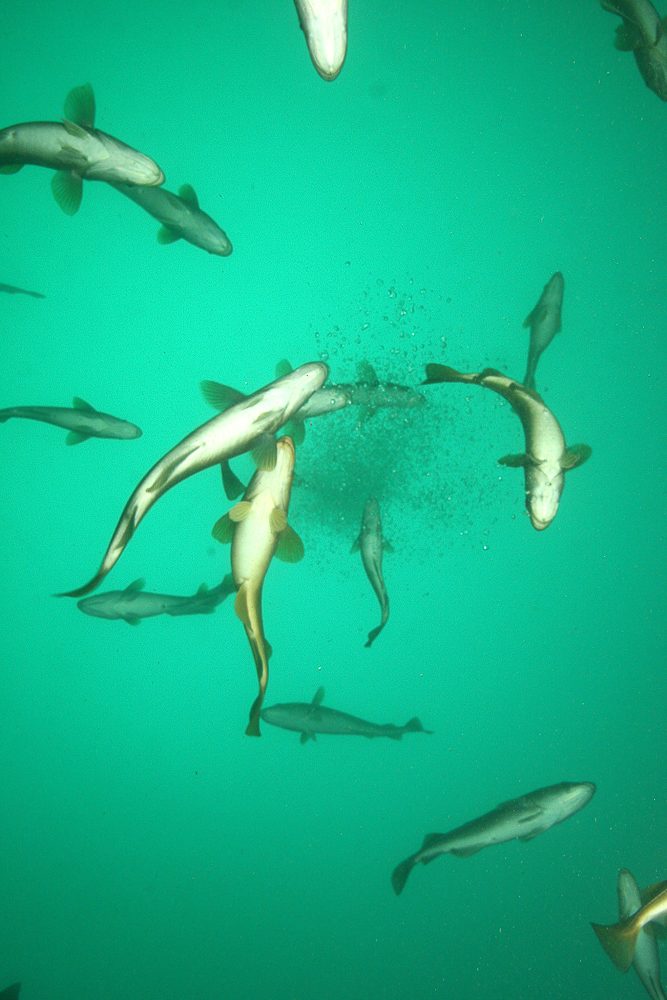 A few species thrive at the border of these two zones. These are the most common species on the north coast and in Icelandic waters, in general. Fjords and bays in northern Iceland are especially important as rearing grounds for Atlantic cod (Gadus morhua), haddock (Melanogrammus aeglefinus), saithe (Pollachius virens), Atlantic herring (Clupea harengus) and lumpsucker (Cyclopterus lumpus). Capelin (Mallotus villosus) juveniles are also found there but are much more abundant in oceanic waters outside the fjords. The largest spawning areas for these species are in the warmer waters south and west of Iceland but juveniles drift north with currents.

Adults of all of these species are also found in the fjords. Some are seasonal, adult capelin and lumpsuckers are oceanic except during the spawning season when they migrate to shallower waters to spawn. Some are irregular visitors such as adult herring, which are not common in northern Icelandic waters these days, but have, in the past, often migrated in great schools to feed there.

Cod, haddock and saithe can always be found in the fjords both as juveniles and adults. They are probably the most common species. Less common but always present are redfish (Sebastes spp), Atlantic wolffish (Anarhichas spp), whiting (Merlangius merlangus), shorthorn sculpin (Myoxocephalus scorpius) and various flatfishes (Pleuronectidae).

Several small fish species hide in crevasses or between kelp blades so they will not be eaten by the larger species. These include rock gunnel (Pholis gunnellus), sticklebacks (Gasterosteus aculeatus) and sandeels (Ammodytidae).

Three salmonid species can also be found rivers or lakes in Eyjafjörður; Atlantic salmon (Salmo salar), brown trout (Salmo trutta) and Arctic char (Salvelinus alpinus), which is the most common one.