Lumpfish (Cyclopterus lumpus) have been fished in shallow waters around Iceland with gillnets for centuries. The females are now the primary target because of the value of their roe. There are many well-known fishing grounds for lumpfish along the north coast of Iceland.

The lumpfish has a peculiar lifestyle. It is actually a pelagic fish, spending most of its life in the open ocean far away from land. However, they migrate towards the shore to spawn when they mature. The males arrive first, in late winter, and prepare nests in shallow waters, often in kelp forests. They are highly territorial, guarding their nests fiercely. SCUBA diver Erlendur Bogason has even observed and filmed a small male lumpfish biting and driving away a much larger wolffish, sometimes they even try to drive away curious divers.

The females usually arrive in March, pick out the most handsome male and lay their eggs in their nest. Then they just leave and let the male do all the parenting. The male stays on and guards the nest against all danger.

They also circulate water over the eggs to ensure sufficient oxygen flow to them. After hatching in early spring, the juveniles spend one or two years hiding in the kelp forests until they head out to sea. Upon completion of his parental duty, the male migrates back to the open ocean to feed and prepare for the next spawning season.

However, Erlendur has been observing a variation from this normal pattern at the hydrothermal chimneys in Eyjafjörður. Of all the fish species in the fjord, the lumpfish seems to be the one that is the most attracted to the chimneys. The story starts in February 2010 when Erlendur was diving at the largest chimney at Ytrivík. After spending some time at the base of the chimney, the diver came back to the top of the chimney. For the first time he noticed a male lumpfish that had claimed this chimney as his own and was preparing a nest to attract a mate. For the next six months the fish waited and waited, getting thinner and thinner, apparently not eating anything during the entire period. No female ever came that year and the male was not seen on the chimney after July the 25th. No other lumpfishs were seen close to the Ytrivík chimneys. 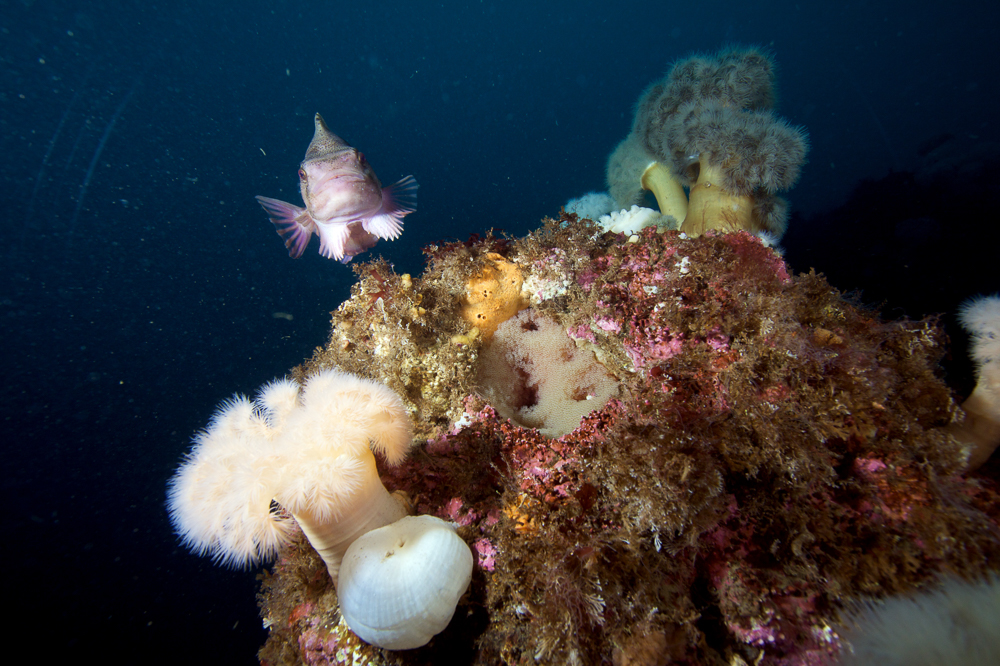 Lumpfish were not seen in the other hydrothermal chimney area close by at Arnarnes until June 11th. On that day, Erlendur was then diving and saw a male lumpfish guarding eggs. It was the only lumpfish with eggs he observed in all his dives from the beginning of June to the 17th of July, when the eggs had hatched. The lumpfish and the diver had become good friends and Erlendur wondered if perhaps overfishing of the females was responsible for the lack of lumpfishs in the area. Theoretically, the lumpfish spawning season should also have been over as they are supposed to only spawn in late winter and spring and then head back out to sea. So, Erlendur began checking on the chimneys regularly to monitor the situation. Surprisingly, on July 22nd, there was a second batch of eggs the male was guarding; he had met another female. Surprisingly, the day after Erlendur saw male lumpfishs guarding their eggs on almost all the hydrothermal chimneys. On the shallowest chimney the diver counted six lumpfishs with eggs in their nests. In a deeper area, called the French garden due to the sea anemone cover, he could also find lumpfishs at exactly the same nest as many previous years. This showed a major change had occurred.

On September 8th, long after the spawning season should have been over, the eggs became dark. This means that they were close to hatching. Erlendur also saw for the first time a dead female close by, raising the question of whether the females survive the spawning. Then to his surprise, when the eggs from female no 2 had hatched, the same male lumpfish was seen with eggs from three females just a few meters away from the previous nest. As soon he had moved, another lumpfish came and made a nest at the old place. Then later in September, Erlendur saw his friend the lumpfish with eggs from female no 6. So this popular lumpfish male had been servicing six females that year.

There are still many mysteries surrounding the lumpfishs. For example, do the males nest at the same place every year? Do the females normally spawn for more than half of the year or was this unusual? How do females choose a mate? Does the hot water from the chimneys provide some advantage for the eggs? Do the females die after spawning? And, if not, where do they go after the spawning season? Erlendur will continue to monitor the lumpfishs nesting at the chimneys and perhaps provide an answer to some of these questions.