The humpback whale (Megaptera novaeangliae) is closely related to the other rorqual species of the genus Balaenoptera but is still different enough to have its own genus, Megaptera, meaning "giant wings". This refers to the huge flippers near the head which are one of the main identification features.

The humpback whale is also much stockier than the other rorquals and has a characteristic warty nose. It can reach up to 17 m length and 40 t in weight, so it is shorter but heavier than the sei whale.

The feeding habits in Icelandic waters have not been studied but its distribution and some visual observations suggest that it is quite opportunistic, feeding equally on pelagic fishes and planktonic crustaceans.

Humpback whales have a global distribution as do the other rorquals. The majority of them migrate to warmer waters, such as the Caribbean, in winter. However, some are known to stay in Icelandic waters during the winter.

Humpbacks can be seen all around Iceland, both offshore and inshore. They are among the most popular whales for the whale watching industry as they are common inshore (where the other large whales are rarely seen), have quite predictable behaviour and are the most playful of the large whales. 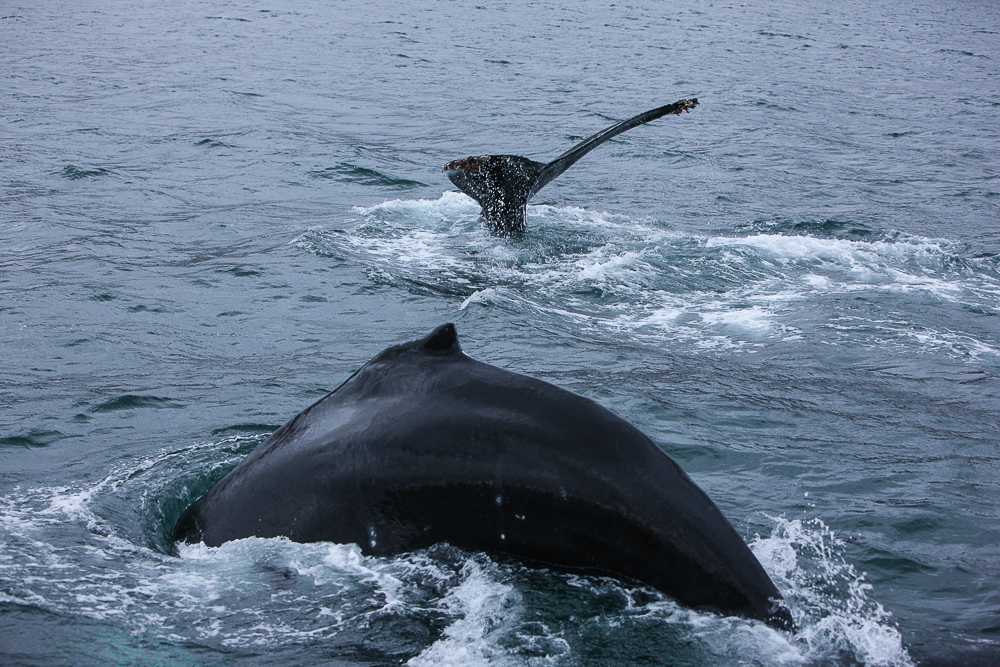 The stock recovery was slow for a long time, as might be expected for a large and slow growing animal. However, in recent years, their numbers have increased by as much as 12% each year. Humpbacks have once again become quite common in Icelandic waters, much to the pleasure of whale watchers. Their number is now estimated to be around 14,000 individuals, which is probably close to what it was before whaling began in Icelandic waters.When the Norwegians established whaling factories in Iceland in 1889 and began hunting whales with modern equipment, about 2,800 humpbacks were hunted before the first moratorium on whaling in Icelandic waters in 1916. Only six individuals were caught after World War Two and a moratorium on humpback whaling was established in 1955. By that time they had become very rare.