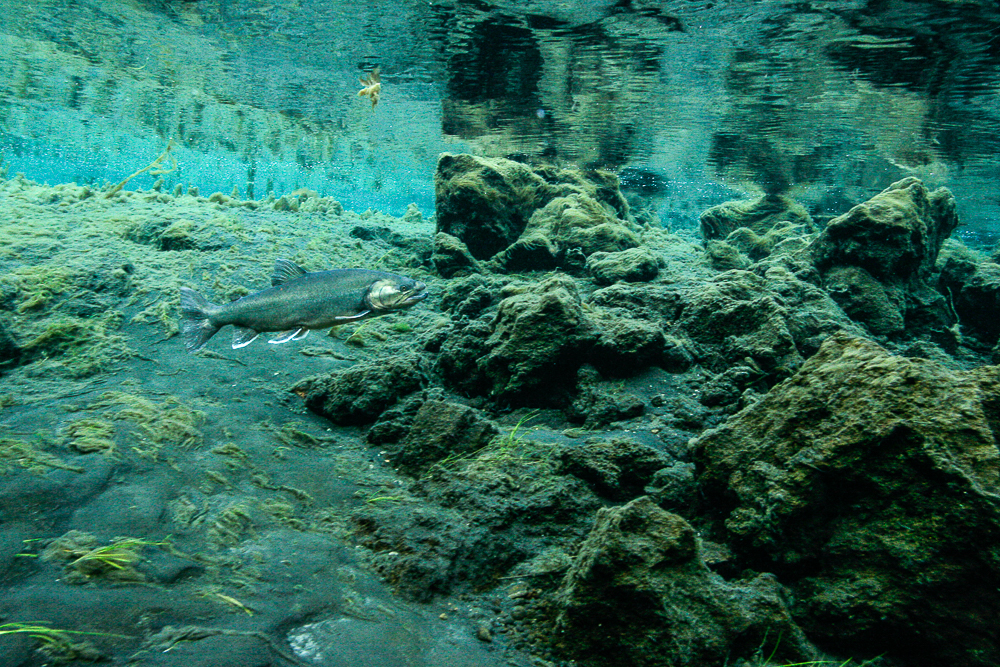 There are only 7 freshwater fish species that occur in Iceland and all are either diadromous (that is, they migrate between freshwater and saltwater) or have diadromous origins. This is because Iceland originated as an island and typical freshwater fishes, such as carps and freshwater catfishes (not related at all to the marine fishes that many refer to as catfishes), found in mainland Europe and North America cannot cross the marine barrier. However, diadromous fishes spend part of their life cycle in the ocean and can therefore cross it.

The best known anadromous species in Icelandic waters are the three salmonids, Atlantic salmon (Salmo salar), brown trout (Salmo trutta) and Arctic char (Salvelinus alpinus). Another anadromus species is the three-spine stickleback (Gasterosteus aculeatus), small but very common fish all around Iceland, both in shallow marine waters and in freshwater.

The European eel (Anguilla anguilla) and the American eel (Anguilla rostrata) are catadromous and are both found in Iceland, though the European eel is more common, especially in the southern lowlands.The European flounder (Platichthys flesus) is a very recent arrival in Iceland and its distribution is still spreading. It is thought to be a voracious predator of juvenile Arctic char, and is a likely contributor to the decline of that species in some of Iceland's southern estuaries. These species are not of much commercial interest, except that eels are sometimes fished in traps for local consumption and the flounder could become important if it becomes more abundant.

Some lakes have been stocked with rainbow trout (Oncorhynchus mykiss), but they have not been known to spawn successfully in the wild in Iceland. Pink salmon (Oncorhynchus gorbuscha) are occasionally caught in Icelandic rivers, but these are most certainly stray fishes from northern Russian rivers that have been stocked with this species. Rainbow trout and pink salmon both originate in the North Pacific.

The fisheries for the freshwater species are fundamentally different, as the freshwater fisheries are mostly managed by the private sector, the owners of the land, while marine fisheries are administered by the government. The utilization of the resources is also fundamentally different today; from the ocean, it is the products from the fishery that yield the value, while in freshwater fisheries it is the fishery itself in the form of fishing permit sales, the catch is almost a nice bonus.