Seals, walruses and sea lions are all classified as pinnipeds, which is a division of carnivorous mammals with flippers. These aquatic marine mammals share a common ancestor with the bears of the world.

Grey seals (Halichoerus grypus) and harbor seals (Phoca vitulina, photo and movie on the right) are the only two that bear young on Iceland’s shores. Harbour seals are common all around Iceland and are frequently seen close to shore. It is best to see them in remote areas as they are shy and usually avoid people. At least they do so on land where they are clumsy. In water they are agile and are often more curious than afraid of people.

Grey seals are much rarer in norther Iceland than in the south. They are even more shy than the harbour seals and stay further away from the main coast. One is therefore lucky to spot the grey seal off the northern coast. The Icelandic names for these seals mirror this, harbour seal is "land seal" and grey seal is "outer seal".

The most common seal species in the world are all living on the edge of the sea ice in the Arctic and the Antarctic. 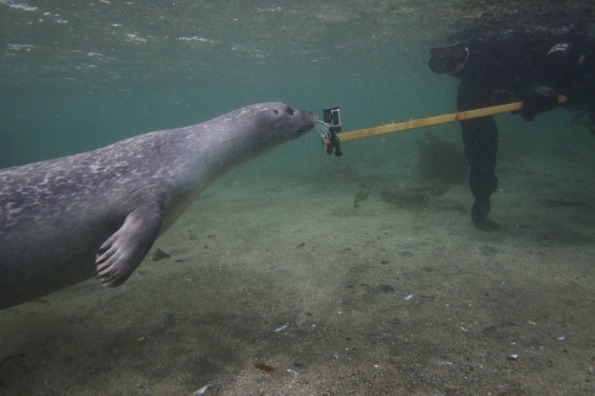 The ice edge is usually some distance north and west of Iceland but the seal species that breed there are all regular visitors to northern Iceland. These are walrus (Odobenus rosmarus), hooded seal (Cystophora cristata), harp seal (Pagophilus groenlandica), bearded seal (Erignathus barbatus) and ringed seal (Pusa hispida). If one sees a seal off northern Iceland in winter it is most likely one of these.

Late in the winter, the

There are many historical accounts of bountiful seal hunts in northern iceland. For instance, in the 1772 travel Log of Eggert Ólafsson there are stories of harp seals either harpooned from row boats or clubbed on the ice in Eyjafjörður. In A description of Iceland, published in 1786, Nikolai Mohr described how harp seals were harpooned and netted and ringed seals were clubbed all the way in the bottom of the fjord when the tide went out, leaving ice high and dry.Icelandic seals tend to head out of the fjords and rarely seen while migrating seals that breed far north of Iceland often appear along the north coast. In days gone by, the arrival of these migrant seals was welcomed by hungry Icelanders who had used up most of their food stores over the winter.

Icelanders have never organized large hunts of migratory seals in the Arctic where they breed but Norwegians did. This practice brought Norwegian ships to Iceland’s shores during the hunting season in years passed, though this type of hunt is no longer viable.